Today many of us will be enjoying get-togethers with friends and families.

Remember those who gave us these freedoms. 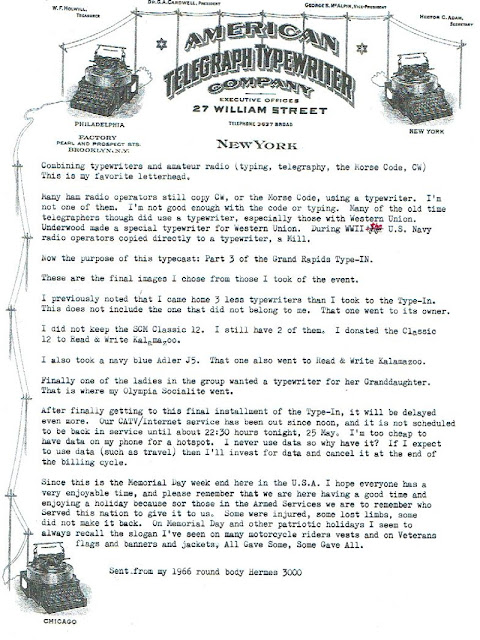 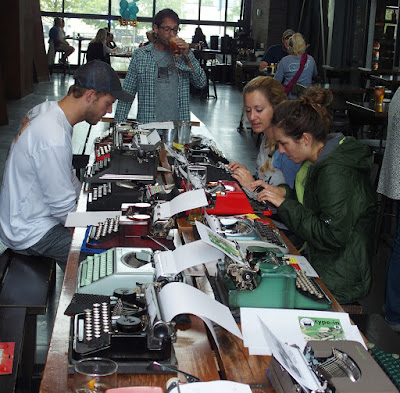 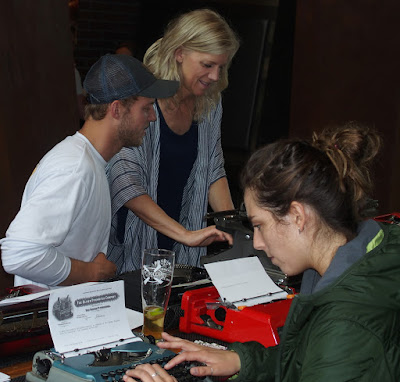 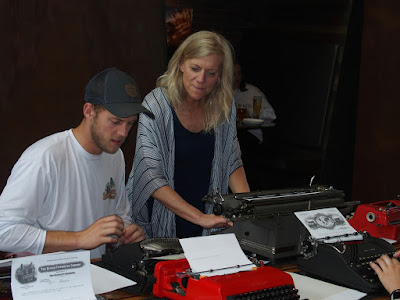 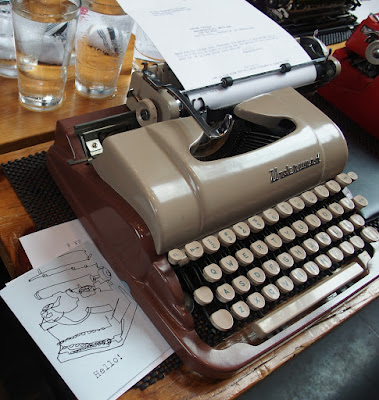 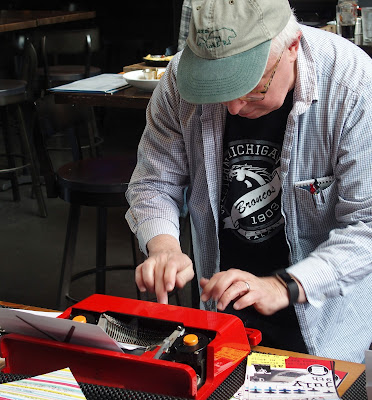 We finally got our internet service back sometime about 23:00 hours. By then I was too tired to post anything.

I did not have any images of my Adler J5 or the Olympia Socialite that I passed on at the Type-In.  However the past week one has been on Joe Van Cleave's and again on La Vie Graphite.  I think my Socialite has been trying to tell me something.  I seldom used mine even though it is a neat tiny travel typewriter.

Tuesday I could not resist the trip to Berrien Springs to check out a Craigslist find for less cost than shipping a similar typewriter from any near-by state.  The Underwood No. 3 is not in the worst shape I've ever seen, nor is it pristine.  Most of the keys and functions worked, and all the gold leaf and decals are in good shape, so it jumped into the car and took a ride home with me.

This is a newer No. 3 than I really wanted.  I'd like an early one with the Underwood Standard Typewriter decal on the top front of the carriage instead of below the space bar on the frame front.  If you read my older post you can read a bit more about this typewriter and the serial numbering.

Underwod No. 3 with a Serial Number Not to be Found 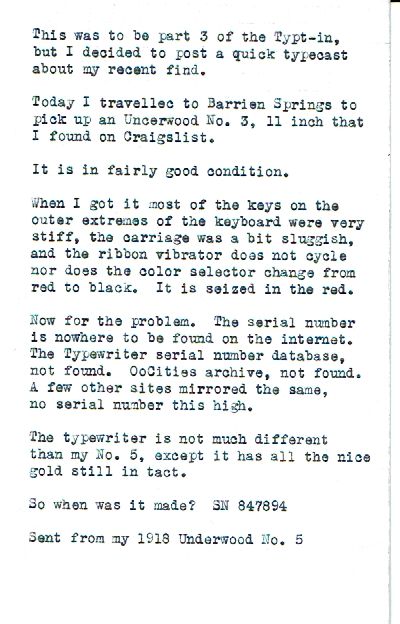 I used some lumber chalk to fill in the numerals to be sure I did not miss anything. This number is not found until the Underwood No. 4 and No.5, and the number states 1916 a full 11 years before the 11 inch No. 3 was released.  This No. 3 also has the newer mainspring with the thumb knob tension adjustment like my No. 6 rather than the crank like my No. 5.

Seems a bit of PB Blaster and a cleaning with carb cleaner has gotten all the keys working, and a bit of Liquid Wrench on the margin rail and some lube on the carriage rail has all of that working ok.

It could be made in 1929, but that would then be a wide carriage.

Does anyone know the URL for the mirror of Wills site that used to be on Alan Seaver's site because Will's link does not work and there is nothing on Alan's site.  I searched the Wayback Machine, but nothing was found there either.
Posted by Bill M at 10:20 PM 12 comments: 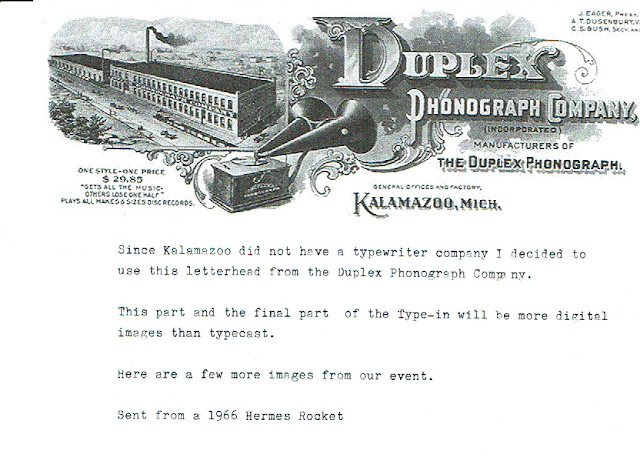 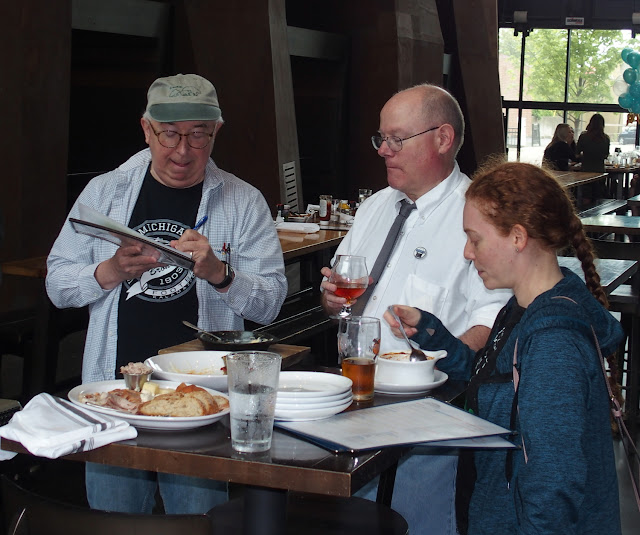 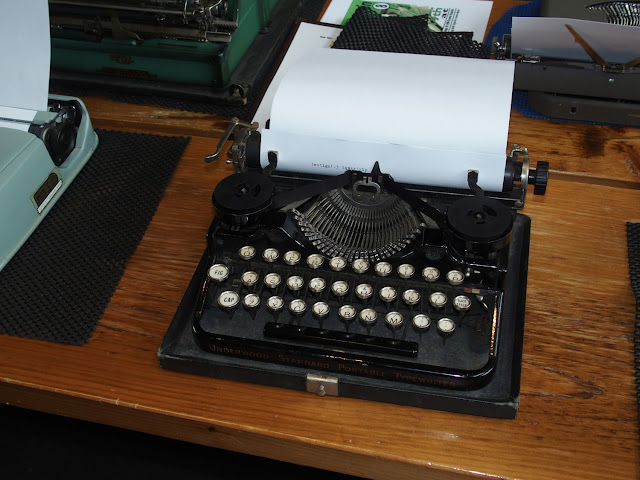 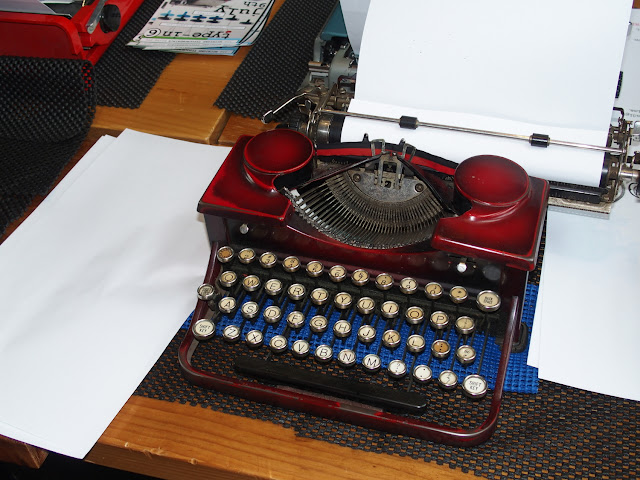 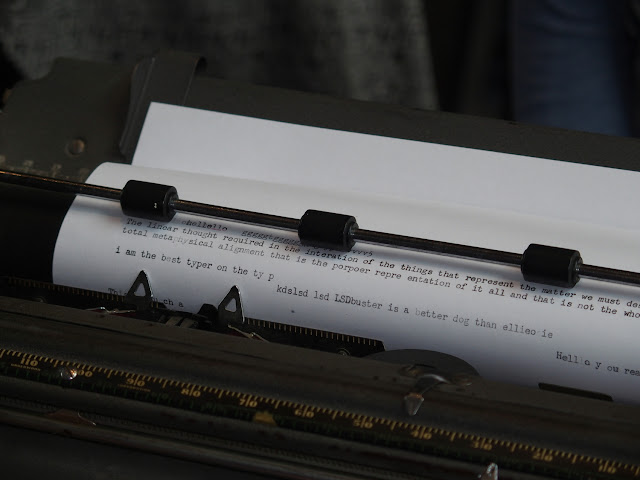 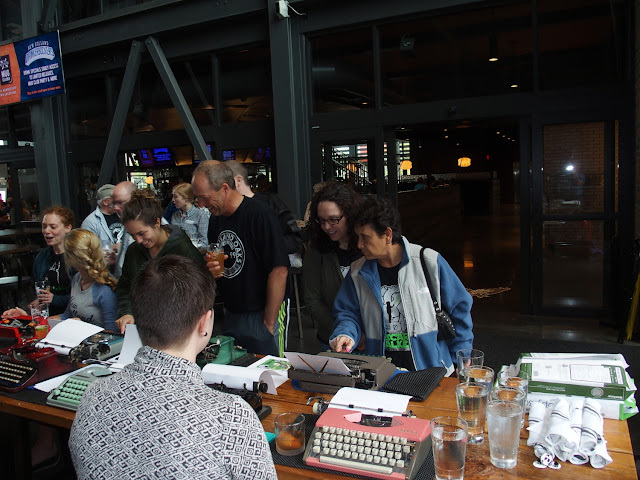 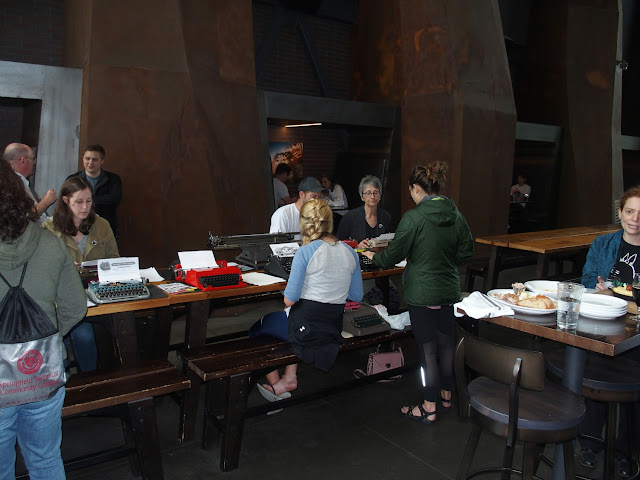 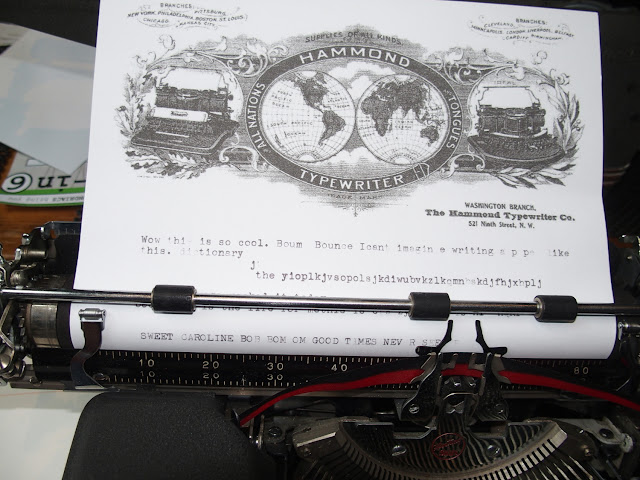 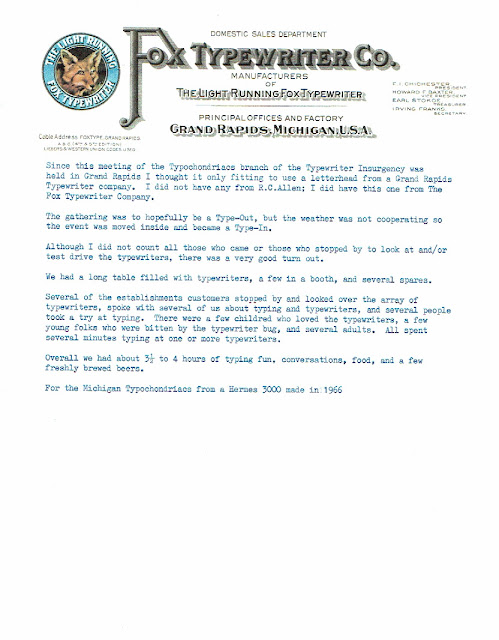 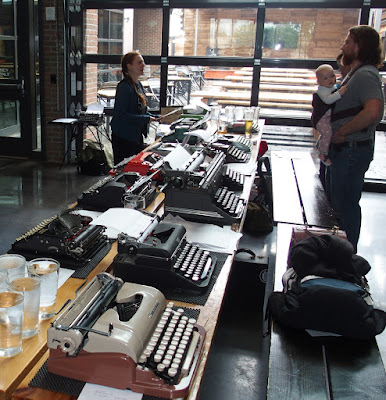 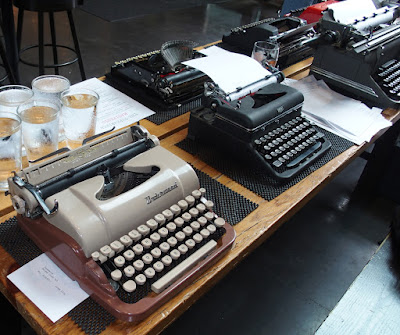 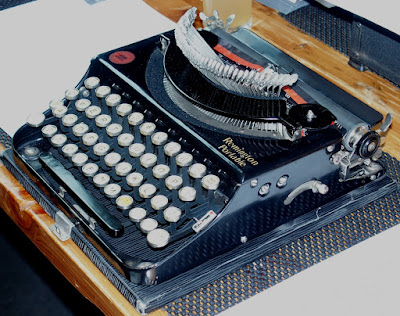 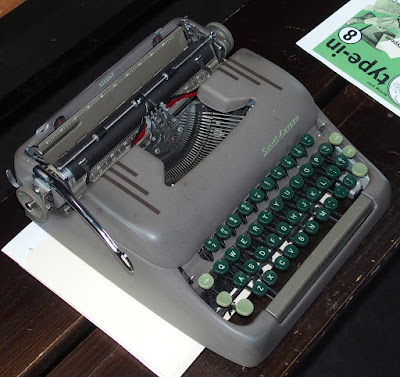 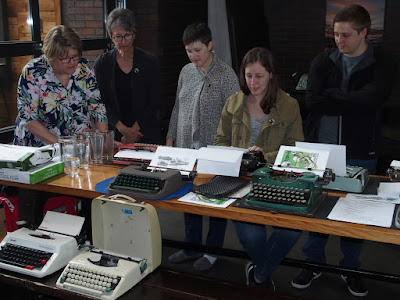 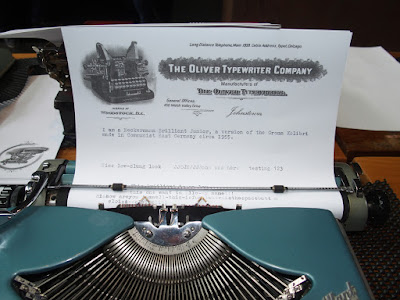 P.S.  I did not take the Underwood No. 5 due to the weather prediction of rain.  There was ample parking about one to two minutes away so moving typewriters was not a big problem, but a full size typewriter in the rain could have been.

I did take the Underwood case/desk or desk/case with one of my Universals, but it saw little use due to my lack to take the folding chair that fits it.  Most of the seating was a bit tall, and I set it off to the side so it would not get knocked over.

There was something odd happened this time. I took 7 typewriters.  One belonged to Andy, and 6 belonged to me.  I only came home with 4.  As Paul Harvey used to say, "stay tuned for the rest of the story."

Out of many, many, many digital images I recorded on the Stylus 1, I chose about
30 from the event to post.  I'll be doing 3 parts as to not have a post that is too long and boring.
Posted by Bill M at 5:38 PM 4 comments:

The Insurgency Meets in Grand Rapids Tomorrow for a Type-Out, Type-In 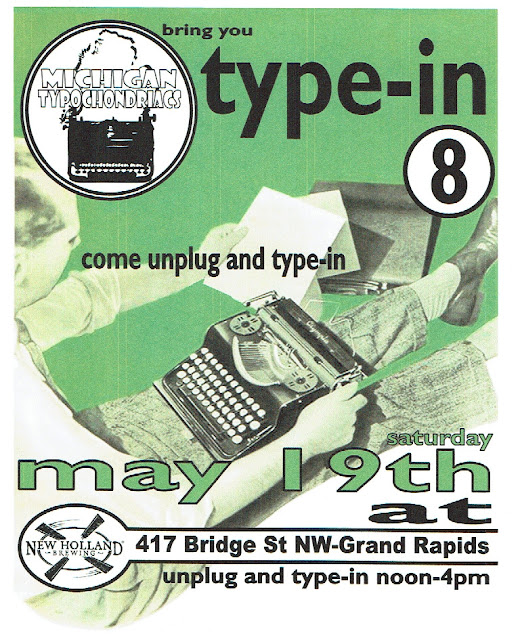 My typing teacher was correct---use 2 spaces after the period.

I found this interesting article, complete with a typewriter heading at The Atlantic.

New Shoes for an Underwood No. 5 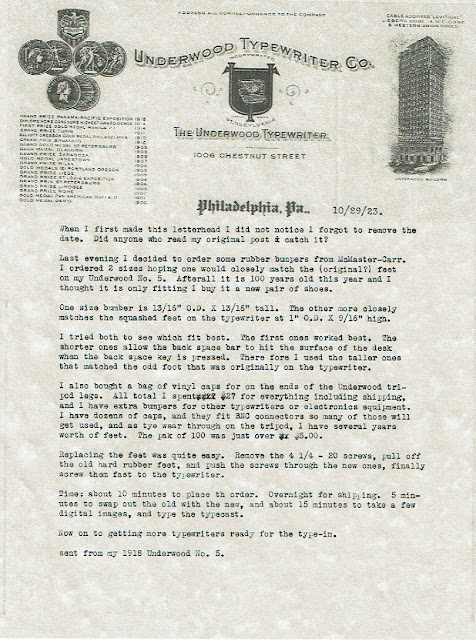 My goal was to get new feet on this typewriter before the Type-In. Mission Accomplished.  I thought about the expensive ones on Ebay, but they'd be more than I paid for the typewriter and not add anything to it like a recovered platen.
When I get to the Royal 10 I will be ordering from Steve Dade for those and may add some Underwood feet as well as another set for my other Corona 3.

Here is the link to the rubber bumpers part number 9540K781

I did a bit of searching on line to see if I could find an original photo of an Underwood No. 5.  No luck.  I did find several advertisements though and they all show the taller feet like the one original tall one and the ones I just installed.
My thinking was I could put a small spacer between the shorter ones I got and the typewriter and create just enough space for the back space bar to not touch the table surface.  Since it looks like these typewriters sat a bit high and used the taller feet, I'll leave this No. 5 as it is.

After the Type-In this typewriter will be getting a recovered platen from J.J. Short and it should be good for another 100 years. 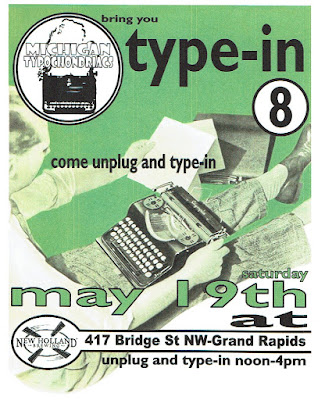 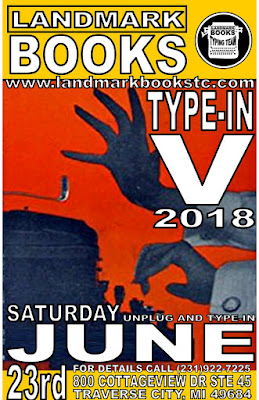