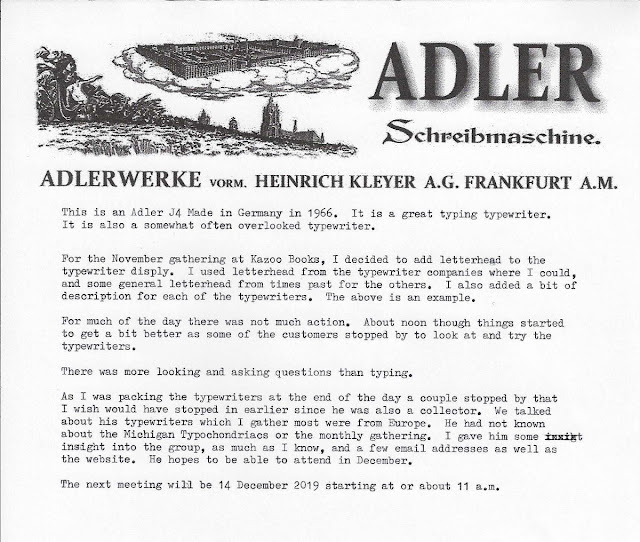 Neat thing about typewriters is that each of them have their little quirks.  Each typist has their favorite, even among similar models of the same brand.

The little Corona 3 is fun to use, but not a typewriter I'd like to use if I had several pages to type.

The Brother line of typewriters always seems to be satisfactory for almost any typing. I like the small machines like this Charger 11 (along with Smith-Corona Skyriters, Hermes Rockets (Baby), and a few other small portables) for travel.  The snap-on cover or case makes these typewriters nicely suited for travel.  The typing action of the Charger 11 is not quite as nice as a Skyriter, but overall not a typewriter to be left behind for a trip or a bit of bicycle typing or typing in the park.  I prefer the integral case/cover to the luggage style zipper case of the Valiant or the Olivetti Letter 22 or Lettera 32 although I like that the Lettera models have tabulators.

The Adler J4 seems to be one of the models that does not get much mention on line.  I really like this one.  I should use it more often.  Touch is really nice, and carriage return is almost effortless.  The carriage is also very easy to remove and reinstall.

Hermes 3000 typewriters are what they are, mostly over rated.  Seems people either love them or dislike them.  I've never been impressed by the square body models even though I have 7 of them with various typefaces.

The round body ones seem to be the nicest typers with a nicer action than the square body ones.  Both styles seem to be quieter than other typewriters.

There are references on line that the mechanics are the same between the round and square body ones.  Well, if that were true shouldn't all the parts (but the covers) should be interchangeable? They're not.  The basic design may be very similar, but not fully parts interchageable.

I do like the sleek style of the square ones and the close tolerances of everything from how the ribbon cover fits to the just enough clearance for the carriage return arm to travel above it to the quietness of its action, and it also has an integral lid/cover which makes it a nice full featured portable that is quite near an office machine.

The SM8 is one of my favorite Olympia typewriters.  This one has a very nice action.  It is noisier than either the J4 or H3k, and about the same as the SM9.

The SM9 is a nice typewriter also, but not as fast as an H3k or the many other typewriters.  I like the typeface on this one, but not the zipper case.  Zipper cases are one of my pet peves of poor excuses for a typewriter case.

Both, like most Olympia typewriters I've used, are nice to use, but easily out typed.  I prefer the SM3 and SM4.

We meet again in December.  If you are local stop by and try the machines. You may be surprised as which ones you prefer over others. They are all nice, and all have similarities and differences. Each gathering also has a gathering of different makes and models of typewriters.
Posted by Bill M at 1:16 PM 4 comments: