I read on several sites about this being a depressing typewriter from the Great Depression.  I think it is quite neat.  I like the all upper case oblique or italic pica font.  I do get confused and hit the Z for a shift key at times though.  It's big brother is on my wish list.

Thank you Dwayne F. and Richard P.  you were the only readers who attempted to name the typewirter.  Dwayne answered correctly on the first post.

This is the typewriter I like to keep at work.  I may take my Underwood.  Then every other month I would have a different machine.

This is the Rounded Body Hermes 3000 Taken Apart

So from seeing the typecast done on a full sheet again may give another hint as to the typewriter used.  I'm surprised at only one guess from yesterday's post.
I'm giving a few more days to see if there are any other readers who want to post a guess at what this machine without a 1 or a 0 key just might be.  Then as many of the old portables; no tabulator either.  It came home with me because I liked its typeface, and it had a good ribbon too.

This project could or would not be done if it were not for this post I found when I got my first Hermes 3000:

And a big thank you to Tom Furrier of Cambridge Typewriter Co. for his very detailed and easy to follow post as well as the help he gave through some emails when I had some problems with my first Hermes 3000.  This got me started in tinkering with my machines.

I also thank Richard Polt for his help and fine website.  Richard has always taken time to answer my emails on typewriter questions.

Well there are many others in the typosphere also.  I get my ideas and confidence to take on my projects from all of you.  Thank you.
Posted by Bill M at 5:14 PM 15 comments: 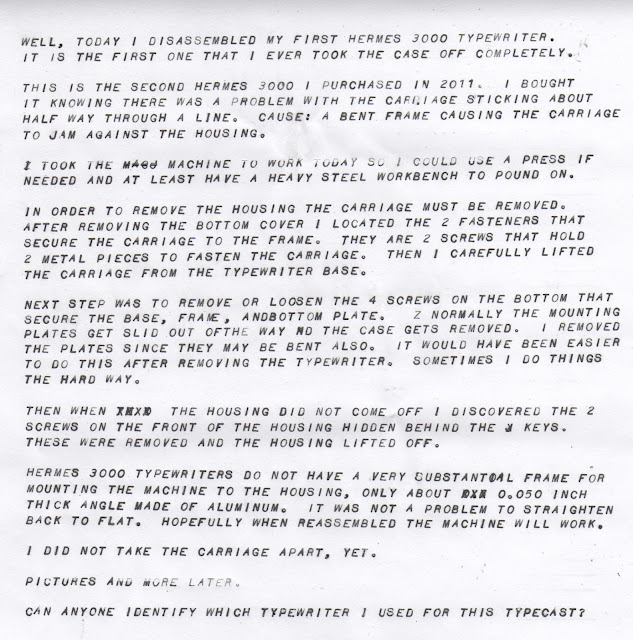 After scanning and posting I noticed a few more typos than I thought I made.
I also got the paper in my scanner a bit slanted.
This typecast is a bit different than most.  I do not have any photos at this time.

I took the machine apart at work and typed the above at work and finished it under a shade tree sitting at a pick-nick table behind one of the gasoline stations on the way home from work.

Normally this is a nice quite place where I can read, write or relax.  Not so with a typewriter.  I caused a bit of interest from the owner and some of the customers when they saw some fellow sitting under the tree typing.

This particular machine caused quite a bit of interest also. 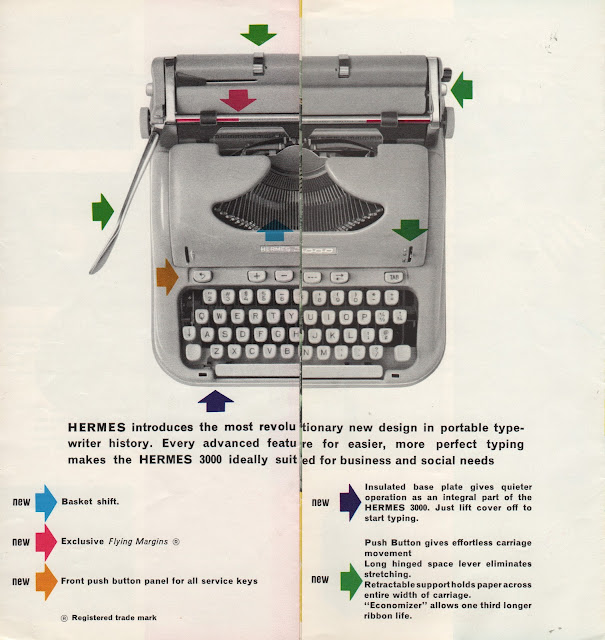 Not the best pictures.  Sometimes when I work on a machine, or just try it when I first get it, I seldom take time to do any photographs and my shop lighting is not the greatest.
Posted by Bill M at 5:21 AM 9 comments:

A not-so Junk Hermes 3000 and the Hermes Typefaces 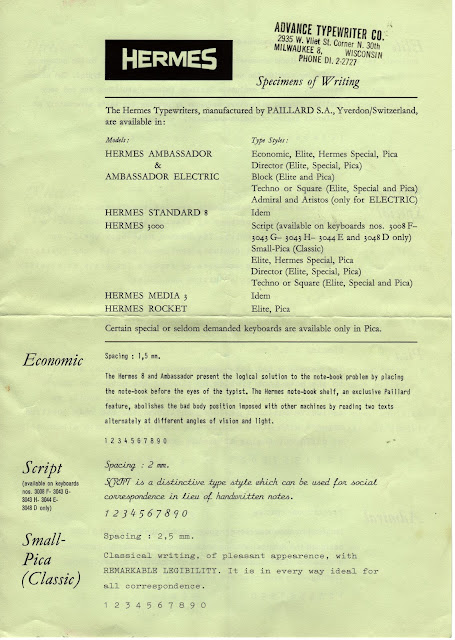 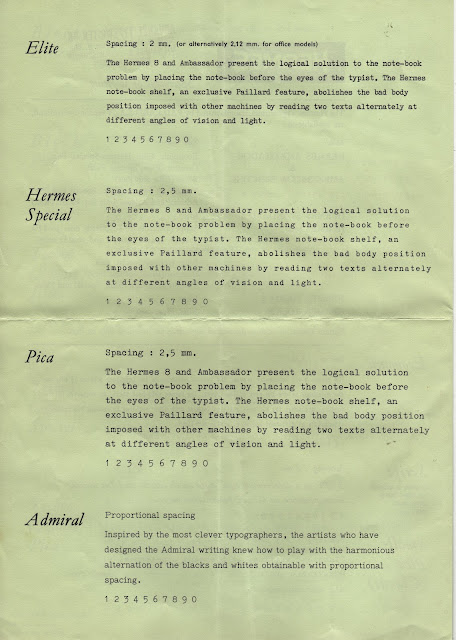 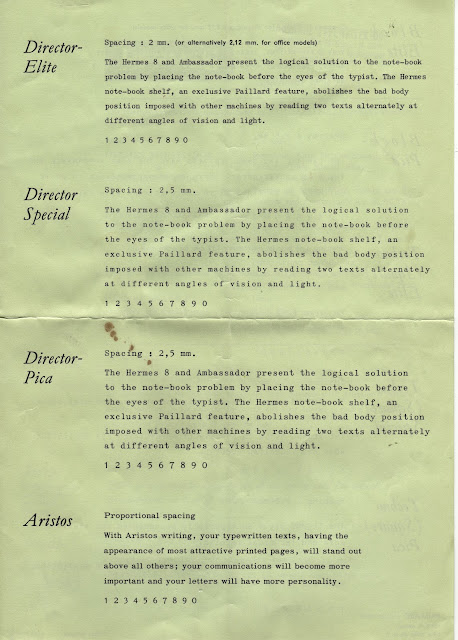 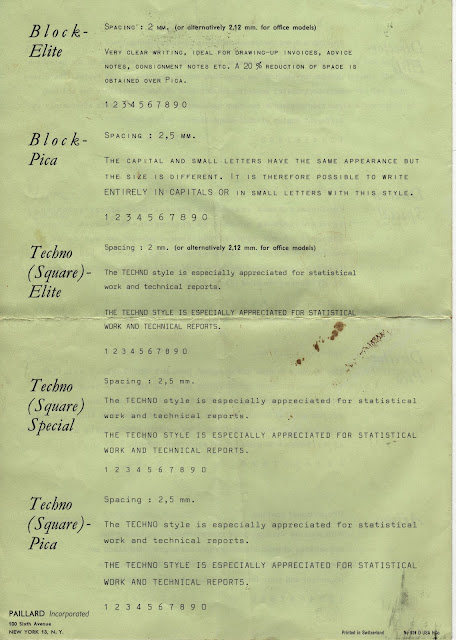 I Bought a Junk Machine! 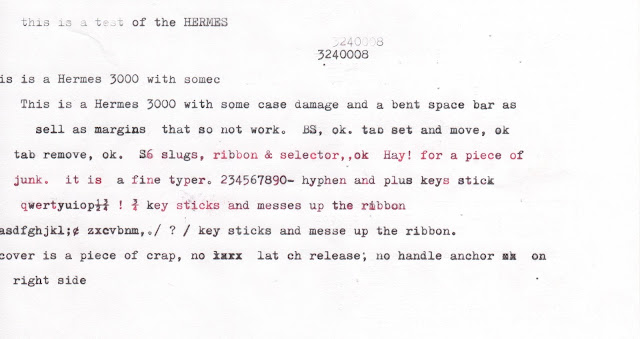 My latest from Ebay arrived today wrapped in cardboard!  Yes, no anything, cardboard, one layer!

Not to fear I bought this as a non working typewriter for parts.  It is a 1964 rounded housing Hermes 3000.  I wanted all the goodies that came with it for my other rounded Hermes 3000.

Now the problem.  This is one fine, I mean the best touch I have on any of my Hermes machines, typer!  It works, almost.  I think the seller or someone not experienced in typing and typewriters tried to work on it for what ever reason.  It types excellently.  If all my Hermes had such a nice touch I never could have commented on their normally mushy feel.

As noted above the machine has problems.  The worst is the margins do not work.   The back carriage cover was not reinstalled correctly so I removed it and unjammed the ribbon indicators and now they work, but no left or right margin.

I will compare it with my other one to see if anything is missing.

Margin release key is jammed.  It is up in its normal position, but will not press.

The bottom of the case was not reinstalled correctly so the machine rocks a bit while typing.

Now I thoroughly understand Little Flower Petals post on her Hermes 3000 that was a bit beat, but an excellent typer.  My machine has not yet lost all of its distinctive Hermes machine shop aroma either.

I also got some weird looks from the Mrs.  as I opened the second box and removed my Skyriter.  It is one with the stripes.  It is also one that many have posted about: the Skyriter stink, yuk!  This one has mildew smell and mildew on the keys.  More work, a later post and I hope a typewriter to take along on my travels.  Well, a choice.  Now I have 3 Skyriters.

So being a bit perplexed I need to decide: fix this Hermes that I wanted for parts, only take the card guide, or to keep the peace -- clean and repair what I can and resell it?

Shipping an Olympia B12 Typewriter 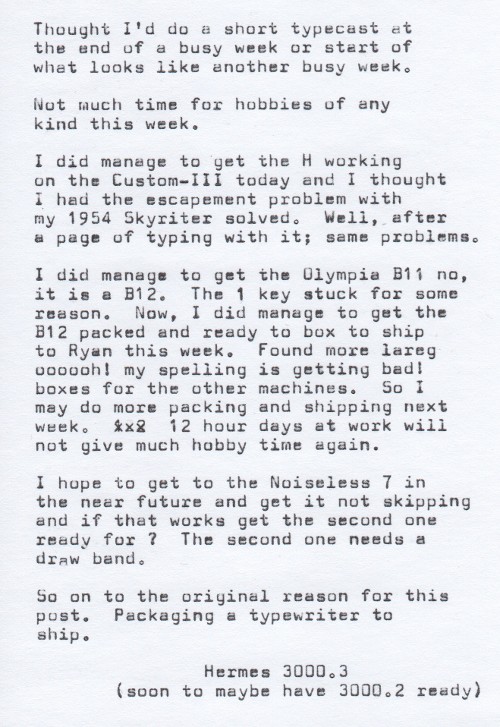 This may be over kill for this typewriter.  I bought it on Ebay and it was shipped to me from California in a box.  Yes, box.  Cardboard and nothing else.  It convinced me the Japanese blow molded cases do their job.  Since then I bought a Brother on line and it was shipped the same way.  Blow molded case in a cardboard box with a bit of cardboard to keep it from shaking.

Both machines arrived in excellent working and cosmetic condition.  I like the molded cases.  They work.  Good transport and protection.
Posted by Bill M at 9:37 PM 7 comments:

Email ThisBlogThis!Share to TwitterShare to FacebookShare to Pinterest
Labels: Olympia B12, shipping a typewriter 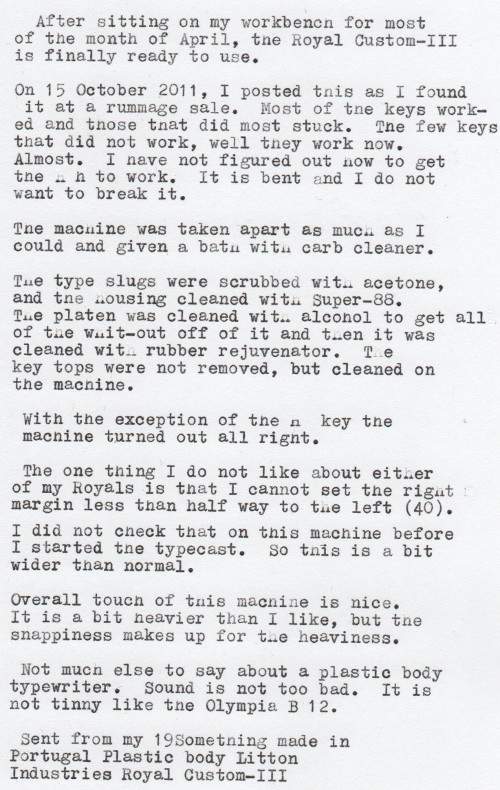 I was never able to find a manufacturing date for this typewriter.  My guess is that is a mid 1970s machine since the fellow who gave it to the rummage sale used it for college about that time.


This typewriter had more white-out on the platen, ribbon path, and housing than what a single bottle of it can hold.  Honestly there was white-out everywhere!  And dust and dirt. 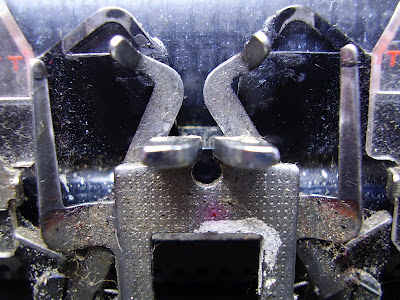 After I had the machine out of the housing with as much removed as I chose the machine is 90% ready for a spray bath.  I covered the key board with aluminum foil to keep the splashes of chemicals from damaging the keys.

Before cleaning I blow as much of the dirt from the machine with compressed air.

After cleaning I use compressed air to blow all the residual chemicals and any junk out of the machine.

One of my favorite tools for cleaning the type slugs is the green handled brush shown beside the tooth brush.  I call it my Barney brush after the green dinosaur children's program.  It is a denture cleaning brush and works great for cleaning type slugs and is not damaged by lighter fluid or acetone.  I got mine for a dollar at Dollar General.  Or other places sell the same brush for around $5.00.  I also use wooden and plastic dental picks to dig crud out of the slugs.

When I first got this typewriter I had to do a bit of cleaning so the type was not all smudges and I had to free some keys to do the Rummage Sale post from October 2011.

One thing -- a word of warning -- that I cannot stress enough about cleaning typewriters or using any kind of spray or chemical that can splash is ALWAYS WEAR SAFETY GOGGLES.

Even compressed air can blow dirt into one's eye(s).  I use the dust and mist proof ones.  (or a full face shield).  Normal safety glasses and goggles do not meet my personal eye safety and protection standards. 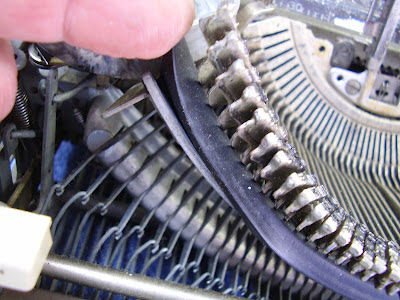 I also removed the type bar rest vinyl cushion so it would not get damaged from the cleaning chemicals. 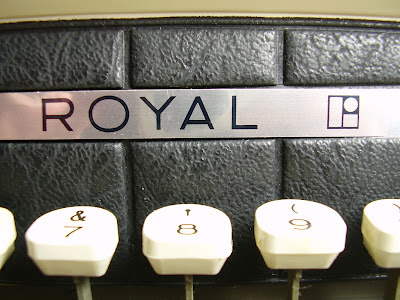 This typewriter (IF I can repair the H) and some of the others are going to become part of Ryan's Classroom Typewriter Project.

Here's a link to all the photos I took for this project:
Custom-III
Posted by Bill M at 6:28 PM 19 comments: