I did not quite know how I wanted to start this post.  If I had chosen it was a Jewell of a day or some similar title I was unsure what to write.

Today is my third day in Pennsylvania and the fifth (not of Scotch though) of my trip.
Earlier today there was a bit of sleet so Debbie and I decided to wait on the weather and see if we would get rain or snow.  As it turned out the precipitation stopped so we decided to take a trip to visit some Army surplus stores since it was one of the planned stops of my trip. We then packed the car and headed to Coleman's Military Surplus.

Debbie had never been to any surplus store before and was amazed at Coleman's.  We spent several hours there and a few more dollars than planned.  We never did make it to Millersburg and Saturn Surplus.  Had I brought my Blazer that would have been a must stop as I wanted to get another 4A032 engine and a few other generator parts.  Now I have an excuse for another trip.

Then we headed North and stopped at my parents house where I picked up the Jewell.

I started to type out on the patio because everyone else wanted to talk and the typewriter drove kitty cat crazy.
Then the snow started falling again and blowing in on my paper.  As the paper got wet it did not want to feed correctly so I plopped the lid back onto the machine and put the typewriter in the car.

Now Blogger lets me have normal justification.  I made quite a bit of typos in the typecast.  The first was because it was difficult typing in the blustery wind.  Later as I started to type in the hotel room I became interested in a documentary about Johnny Cash that I had never seen before, and I did not pay much attention to typing. 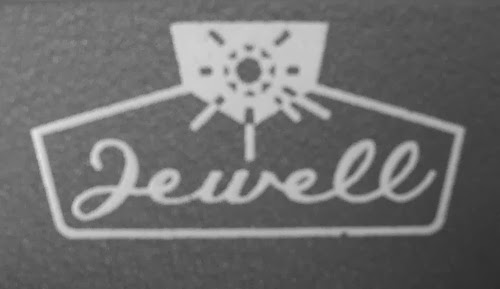 Like my ACE the Jewell has little listed on either Typewriter Serial Number sites.  I am guessing this one is from 1954 since the serial number is W 2499306.  If any one knows better please let me know.


I bid everyone a very enjoyable and HAPPY THANKSGIVING!

For now from the Keystone via my Underwood Jewell and Dell XPS
Posted by Bill M at 8:31 PM 11 comments:

Live and Direct From....Well, At Least I am in Pennsylvania

This is kind of a hybrid post/typecast.
I'm actually in East Pennsboro Township, but by Google Maps I am in Mechanicsburg (which I know is wrong.  I grew up in the area and Google Maps are wrong 99% of the time.  I would only trust Google maps if I were giving them to an enemy)  Or I am in Enola according to Yahoo! maps which are usually 90% correct.  Now the other map services are about on par with Google.  The address here is probably Enola since I can toss a stone on Wirtzville and Enola is just over the hill.  Earlier in my life this area was farms and East Pennsboro Twp.

So far this typewriter: 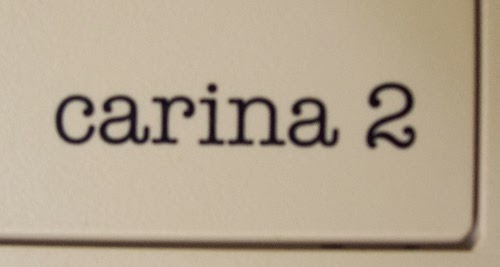 I did not record and look up the serial number.  Presently the typewriter is back out in the car.

I've not gone typewriter hunting yet today as the snow is now freezing rain. Once it changes back to snow or to rain I may head out again.

I planned on using a Skyriter for my posts, but Mrs. is sleeping and the lobby is quite small and there are a few people out there so I resort to the digital realm.  I like snow and if it were only snow coming down from the clouds I would commandeer one of the tables in the closed pool area and type.

Back to the Carina 2.  I find this a nice typing little typewriter.  It is made by Nakajima from all I can find.  The platen is quite nice as it is soft and quiet. It reminds me of my recently used SM9 or my Skyriters.  The typewriter is fully featured with a tabulator, paper guide, pop-up paper prop, famous Japanese automatic, but I have yet to find anything but uselsess, automatic spacer, 1, 2, or 3 line spacing and variable, a nice touch and nicely built machine for being a later plastic machine. It seems to be more substantial than my Brother.  I will need to compare them when I get home.

This typewriter does not have the cheap tinny sound of the Olympia B12 that I used to have.  The B12 was also a nice typer, but neither the B12 or the Carina 2 come close to the touch or quality of any of the early typewriters in my collection.

Typecast from my Carina 2.  Post from my Dell XPS running elementaryOS
Posted by Bill M at 12:33 PM 20 comments: 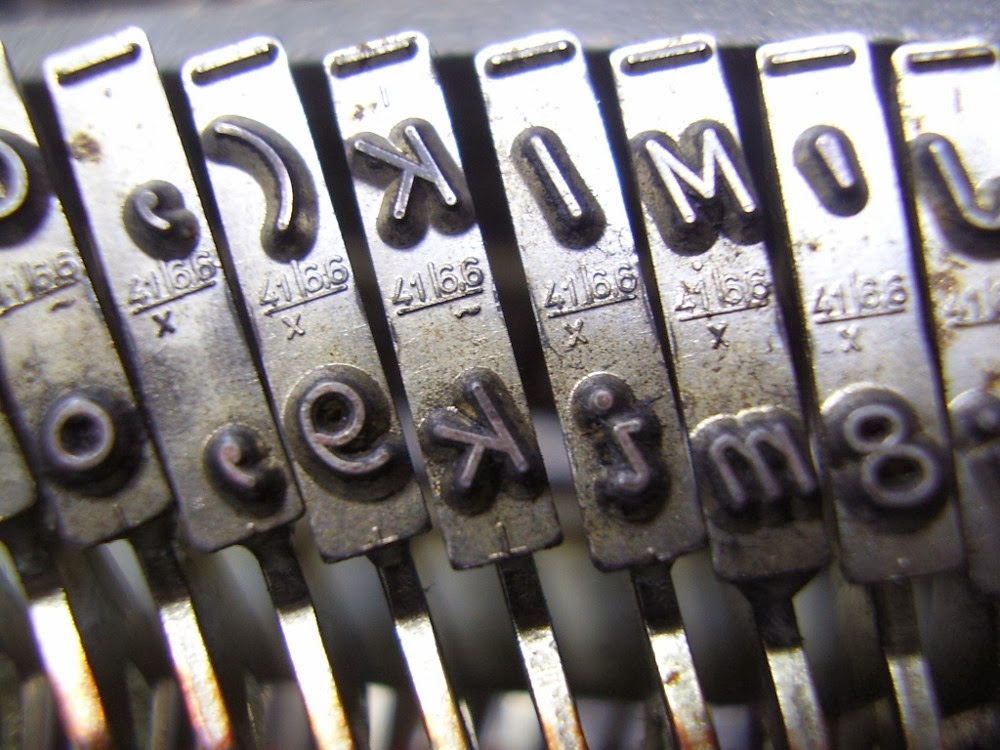 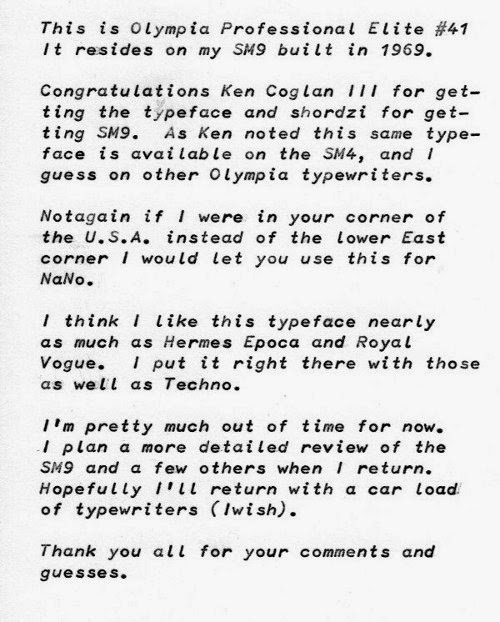 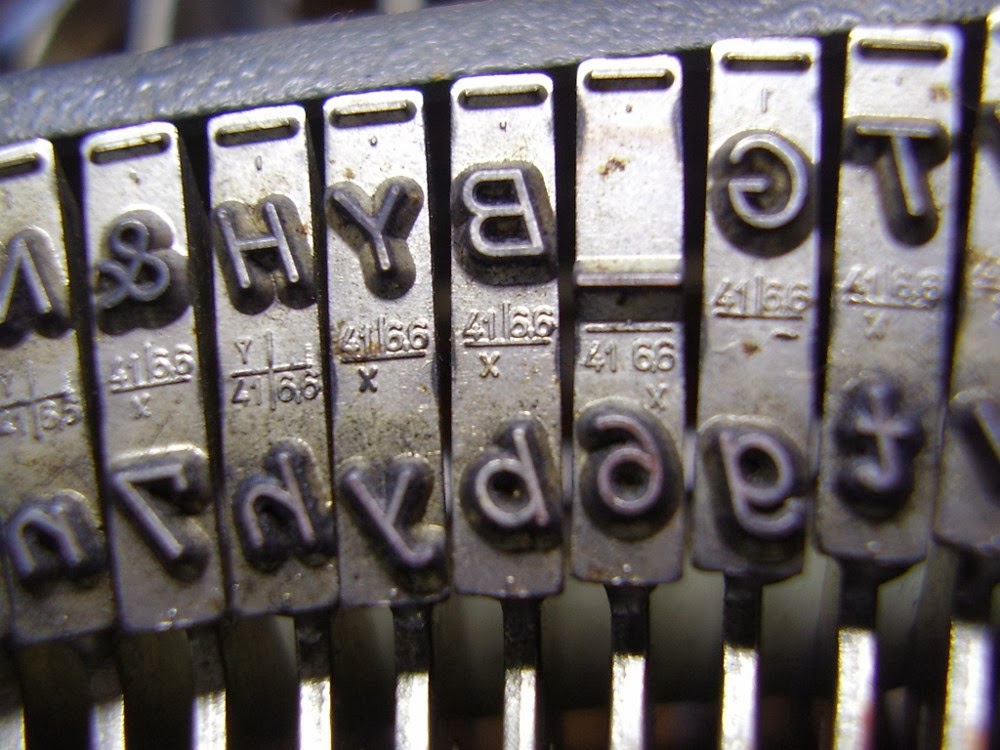 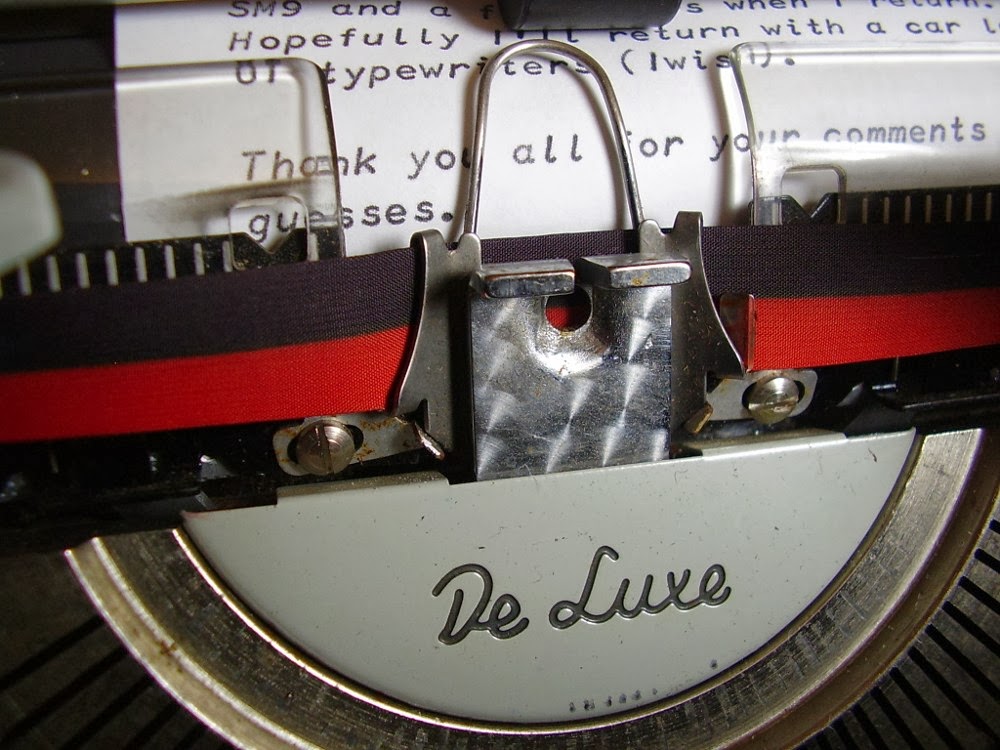 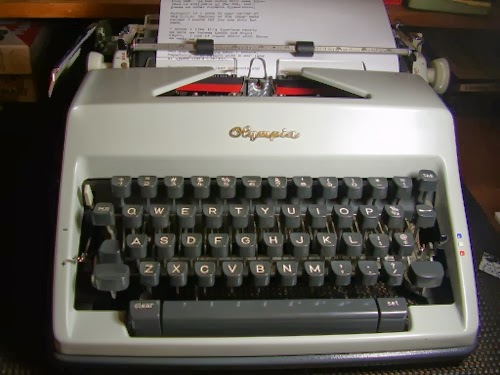 More on Professional Elite and an SM3 can be found here courtesy of Dwayne F.
Posted by Bill M at 12:00 AM 6 comments: 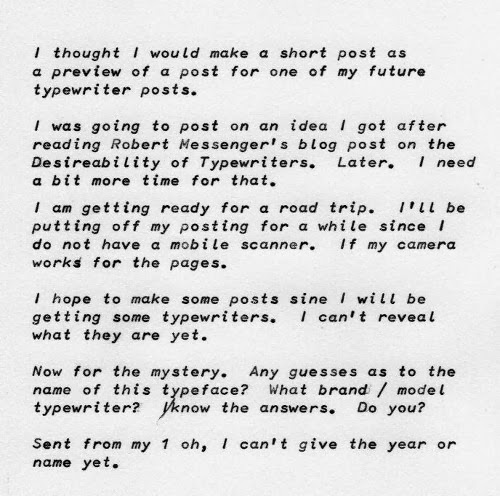 This has got to be one of my favorite typefaces in the collection.  That said, it takes a lot to beat out Techno.   This new one could very well be the favorite one.

Email ThisBlogThis!Share to TwitterShare to FacebookShare to Pinterest
Labels: typeface 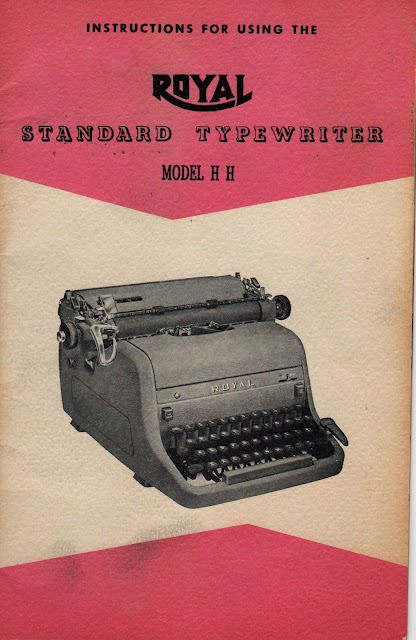 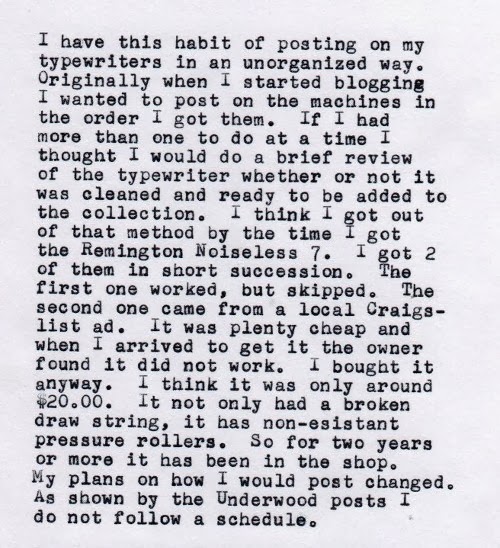 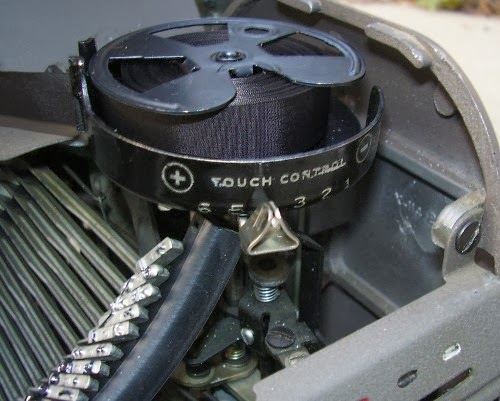 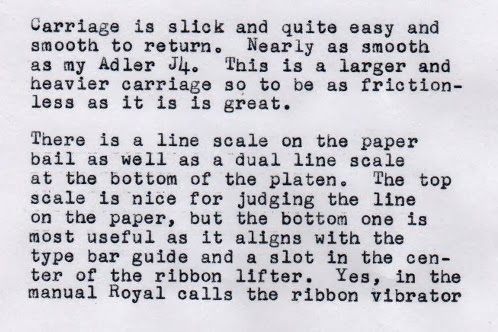 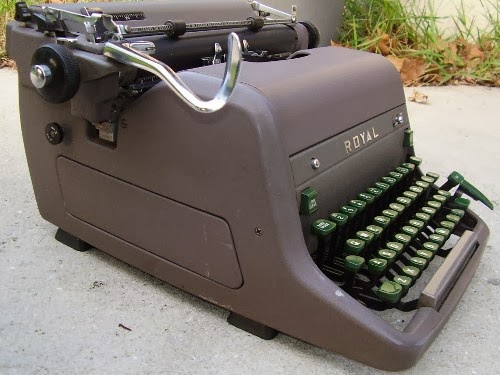 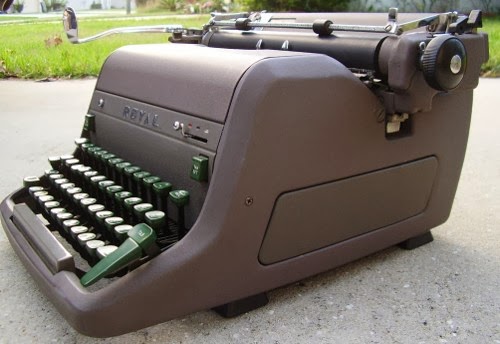 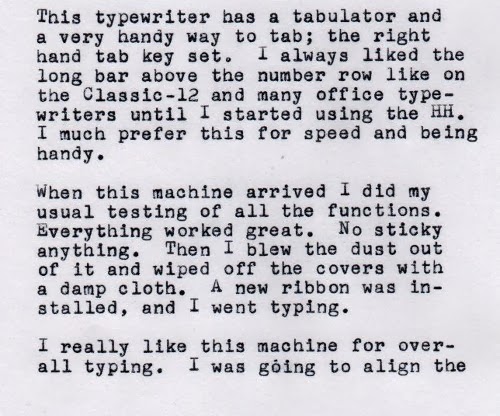 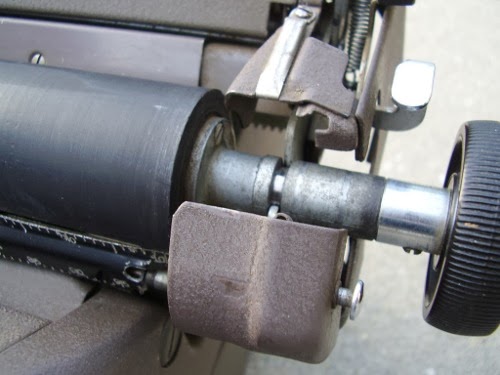 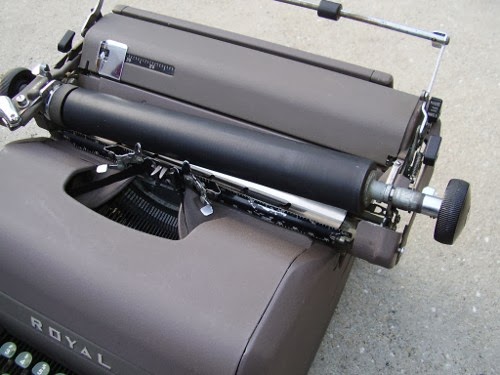 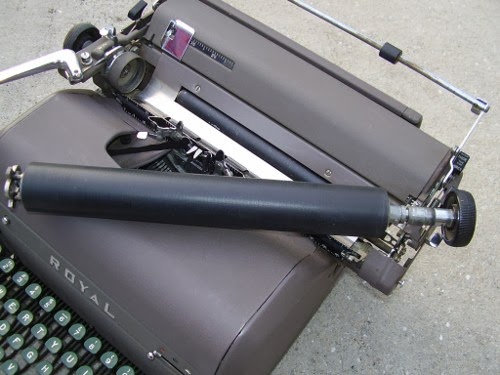 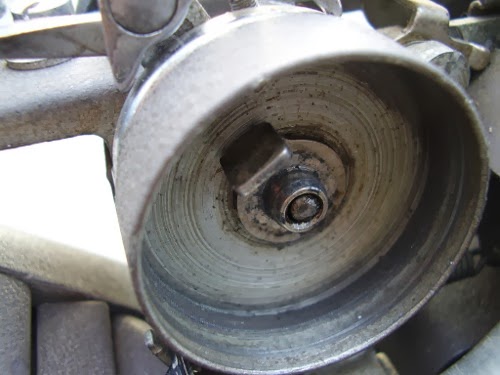 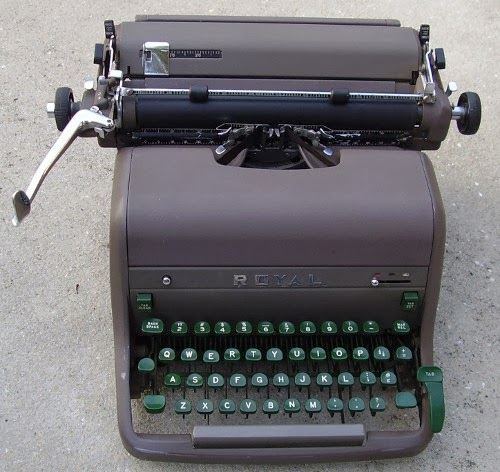 I wanted to title this post H-Squared mathematically, but one of the features Blogger lacks is the ability to superscript in the title. I tried coding it and the title does not let me enter html code either.  I thought He2P or H^2P may not be clear to someone not in programming or engineering or math.
Posted by Bill M at 8:10 AM 21 comments:


I believe this is a Rhythm Touch, but I am not sure.  It matches the Underwood Standard from 1947 on Alan Seaver's site.  Mine is not as clean, yet.  The numbers past the 11 (which may indicate the platen or carriage length) put this machine in 1947.

The book I mentioned I found by a link Robert Messenger  posted on his blog, but I could not find it again to link to his post.  The book was written in 1917,
The Evolution of the Typewriter.

So far the best 2 typers in my collection are my Underwood Standard Portable 4 Bank and this typewriter.  Nothing is as fast and easy to key as these two.  My Adler J4 comes close, but just does not quite make the fantastic Underwood feel.